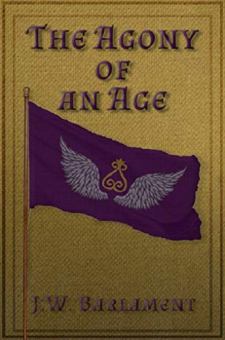 From J. W. Barlament, author of The Plight of a People, comes an intricate tale of power, warfare and torment. Continuing the saga set up by its predecessor, it presents three more riveting stories of uninhibited hardship.

In Part I, the immortal philosopher Rahdain is thrust into a life of turmoil as he attempts to prevent a cataclysmic war. In Part II, the struggling king Hallmund faces down rebels, zealots, invaders, and inner demons alike in a maelstrom of misery. Finally, in Part III, the simple villager Reolus strives to save his family from both a bloodthirsty murderer and the unending menace of nature.

The Agony of an Age is a fantasy epic filled to the brim with political intrigue, pressing issues and personal perseverance. It harkens back to an era of mythic beasts and inhuman masters, never letting itself dawdle into mundanity. And, at the same time, it stays focused on the tribulations of the human spirit that drives and unites us all.

The Agony of an Age | Available from Amazon

Over the course of 14 months, and in between both school and work, I crafted this immense novel. It contains within it much of the philosophy I have stumbled upon, and it needs not be read on a surface level alone. It is just as valuable, if not more so, for the themes that lie just beneath its surface. Lovers of action, drama, suspense and philosophy will all adore The Agony of an Age. United States
J. W. Barlament is an author, blogger, poet, and student from the United States. In addition to writing, he has interests in music, politics, philosophy, and religion that he plans to pursue further once he gets out of high school and into college. All of his works and musings can be found either on his website or on social media.
Learn more about Jared Barlament