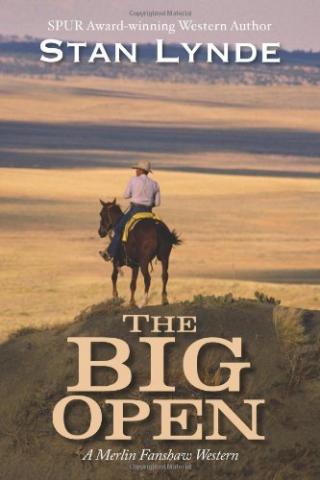 I'm Stan Lynde, author of The Big Open and seven other Merlin Fanshaw western novels. Thanks for stopping by!

Back in the days of the early west, when cabin doors were secured from within by heavy bars, absent settlers offered hospitality to the occasional visitor. A leather thong attached to the bar inside the cabin was extended outside through a hole in the door. A pull on the thong lifted the bar inside and allowed the visitor to enter. This practice led to a western phrase of welcome which I extend to you here at my "cyber ranch," the latch string is always out. Come on in; let me show you around!

Stan Lynde was born and reared on the rangelands of the Crow Indian Reservation of southeastern Montana. He is the creator, author, and artist of two highly acclaimed nationally syndicated cartoon strips, Rick O’Shay and Latigo.

Stan has been listed in Who’s Who in America and Who’s Who in American Art. He received the Inkpot Award in 1977 for achievement in the comic arts and the Montana Governor’s Award for the Arts in 1983. Stan is a prolific and popular author of western fiction. His eight published novels, set in Montana Territory during the 1880s, include seven novels in his... more

Other books by Stan Lynde