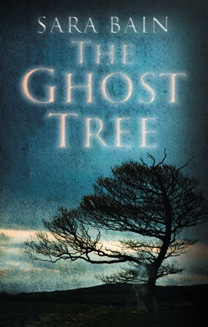 Five years after the death of his wife, MacAoidh Armstrong moves into a smallholding in southern Scotland with the intention of living a self-sufficient existence. In the nearby town solicitor Libby Butler is trying to find peace after her recent deadly brush with the unknown.
On a hill by the steading stands The Ghost Tree: all that remains of the former Ringcroft of Stocking. Local legend says that when the last Ghost Tree dies, the Rerrick Parish Poltergeist will return.
Just days after MacAoidh moves in, he is forced to contend with a number of strange events that distance him from the local community. Turning to Libby for help, they find themselves challenged by a series of bizarre and terrifying occurrences which defy all logical and scientific explanation.
As the phenomena become increasingly violent and lives are threatened, Libby must delve into closely guarded secrets to discover the reason for the present terror…and come to terms with her growing feelings for MacAoidh. Can she save the pragmatic Highlander from an ancient evil, and in doing so will she lose her heart?

Get 'The Ghost Tree' from Urbane Publications
Author Site

An imaginative thinker with a career as diverse as the number of genres her fiction crosses, Sara Bain is one of those people who has the ability to write to any formula but chooses to adhere to none. She was brought up in London, qualified as an English barrister and pursued a career in legal publishing where she learned to produce academic texts and draft complex legal forms. She then left the bright lights of the city and moved to Scotland where she worked as a journalist for a local newspaper for 15 years and learned to write facts as well as creative features. She has been a law... more

Other books by Sara Bain