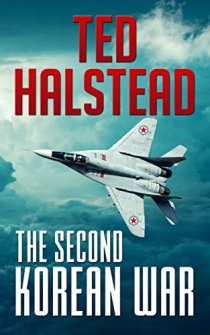 Two Russian agents discover a missing nuclear weapon was hidden in an American city by North Korea. Another nuclear weapon nears Seoul in a tunnel built by North Koreans. And North Korea's new military dictator launches an all-out invasion. Will Seoul or Pyongyang be the new capital of a united Korea?

Nuclear weapons will play a role in any future Korean War. Many factors, though, make their use dangerous for North Korea. Their accuracy is unsure. American anti-missile defenses may stop some or all nuclear attacks. Successful nuclear attacks on South Korea could give the North a devastated prize not worth having. Any nuclear attack on the United States would guarantee a response even Kim Jong Eun knows North Korea could never survive.

But, North Korea has spent billions to create nuclear weapons in one of the world's poorest countries. How could North Korea decide not to use them in any future Korean War? Short of war, is there any way nuclear blackmail could force South Korea to surrender to North Korea?

What if the North Korean military were in charge of that country? After decades of indoctrination in the Kim dynasty's toxic world view, would their agenda be any different?
China and Russia both border North Korea, and have played key roles in supporting the regime. Both have their own national interests. How would they seek to profit from a second Korean War?

South Korea has about the same land area as Indiana. How could a conflict be contained so that it avoided national devastation, even if North Korea is finally defeated?

The Second Korean War imagines the answers to these questions in a novel that takes place in North and South Korea, China, Russia and America. The author has drawn on four years of living and working in South Korea, study at the National War College, and decades of experience working for the US government to give the reader one possible future - one he hopes can be avoided.

Other books by Ted Halstead