There's a Tick in My Underwear!

Book by Sally A. Breslin 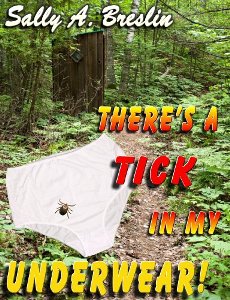 I grew up in the largest city in New Hampshire, so when my parents bought a rustic cabin in the wilderness so we could “get away from it all” during summer vacations, you might say I was less than excited. In fact, my expression when they informed me we’d be spending most of the summer in the middle of nowhere, kind of resembled that of someone who’d just been told she needed an appendectomy.

For one thing, the cabin featured the most dreaded building in the history of my existence…the outhouse.  One look at the rickety old structure all but promised an instant case of constipation. And the cabin had no electricity, no running water, and…heaven forbid…no TV. Staying there, I was certain, wasn’t going to be a vacation, it was going to be nothing short of torture for a 12, almost 13-year-old, city-slicker. I didn’t want to leave behind everything that was familiar to me – concrete, streetlights, bowling alleys, ice-cream trucks and most of all…cute boys. I had planned to experience my first kiss that summer, but how was I supposed to do that at the cabin, unless I wanted to kiss a squirrel?

Not wanting to suffer alone, I convinced my good friend, Janet, to come with me on my wilderness “adventure.”  After all, friends were supposed to share both the good and bad, right? So together, Janet and I learned the ups and downs of primitive living – the mice in the blankets, the leeches in the river, the scary noises in the bushes…and the country boys at the local swimming hole, who vastly differed from city boys. In such an unlikely place, Janet met the love of her young life, her Prince Charming. I, however, met 10,000 mosquitoes, every species of snake native to New Hampshire…and Conrad.

I changed the names and locations in this book to protect the not-so-innocent, but the plot was taken directly from the entries in my 1962 journal, which were too hysterical not to share!

Technically, because the material for this book was taken from the journal of a 12-year-old, you might say a pre-teen wrote it, as seen through her eyes - no matter how silly or absurd it now seems! I enjoy reading my old journals because they are like time-machines, transporting me back to a specific day or week in my life and allowing me to relive it. I mean, how much fun is it to know you ate Rice Krispies for breakfast on July 3rd when you were in the 8th grade? Or to once again experience the humiliation of trying on your first bra? I laughed so hard when rereading my 1962 journal, I knew I just had to turn it into a book so I hopefully could make others laugh, too - or at the very least, remind them of their own lives and all of the crazy things they did when they were 12!

About Sally A. Breslin United States
Sally Breslin was born and raised in New Hampshire, where she still resides, so she is a true New Englander through and through. She knew at a young age that writing was her passion. She started writing poetry when she was only eight. During summer vacations from school, she would sit on the front steps of her tenement building and write books. Each day, groups of children from the...
Learn more about Sally A. Breslin

Books by Sally A. Breslin

This book reminded me a lot of the nostalgic favorite, "A Christmas Story," as it's told in a similar manner with the same type of innocent wit and humor, and also takes place back in the "good old days" when life was so much simpler. It made me laugh, made me think, and most all made me reminisce about the days when I was an angst-ridden pre-teen! Loved it!