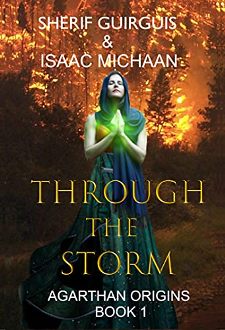 Rowida walks a path of power, but at what cost?

Rowida is an Agarthan with a green aura, and the green aura nation is known for its modesty. Not Rowida though, she despises modesty, and thinks of it as a pretense. Rowida is honest, she wants power.

Her path to power is not without suffering and sacrifice, but she intends to walk it to its end.
Attaining power always has a hefty price, but will Rowida learn before it is too late?

Rowida might become the greatest warlord Agartha has known, she might become near-immortal, but to gain something, you must lose another, and sometimes the loss surpasses the gain.

Playing to the tune of a hidden prophecy, Rowida's path crosses the fate of two worlds, and it might lead to their destruction.

Rowida intends to leave her mark on history, and nothing marks history more than War.

The fates are watching, observing, and deciding...
No one can revoke their final decision -- not even an immortal.

Other books by Sherif Guirguis