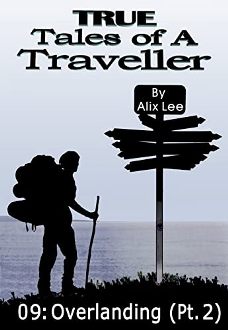 This story picks up from Overlanding Part One, which ended at the Turkish border with Iran, and finishes in the Netherlands.

Of all my travels in the 1980s, in terms of time spent, undoubtedly no journey made such a deep and lasting impression on me as this overland trip from Karachi to Rotterdam, which in total took just a little over three weeks. Not only did it unceremoniously blow away many of my own preconceived notions of life in Pakistan and Iran, it was also a harsh lesson for me as a traveller in the virtues of being prepared for any journey into terra incognita. Additionally, the first part of the journey, from Karachi to the Turkish border with Iran, was relatively dangerous, not due to involving difficult terrain, but rather to man-made hazards. But overall, the journey turned out to be something I originally had never suspected for a moment it would be: an intensive course in the follies of racial prejudice and ethnic chauvinism.

And when I reached journey's end, though I realised the trip had been much different than expected and I had learnt a lot from it, there wasn't anything obvious I could do with this knowledge. When I arrived in Rotterdam I was almost penniless and had to find work and a place to live immediately. I was fortunate enough to secure a manual work assignment with an uitzendbureau, or temporary employment agency for the very next day and by half-past four the following morning was in a minibus with a group of other workers heading for a nuclear power station nearly five hours distant in Germany, back precisely the way I had come the previous day! It would be several months before I had the luxury of pondering on the events and meetings that constituted my overland journey, and by that time I was preparing for my next major piece of travel (related in the subsequent True Tales story, One Day in Bangkok), and disinclined to dwell on it.

I believe that racial prejudice and ethnic chauvinism are weaknesses inherent in human nature. We all suffer from them to some extent at some time or another, usually both as perpetrators and as victims, however much we may like to think otherwise. All we can really do is try to recognise these tendencies for what they are and keep them in check. I was both a victim and a perpetrator of racial prejudice and ethnic chauvinism on this trip. To learn how exactly, please read on...

Like all the stories in the series, it will be available for free download from time to time.

Walk On The Planet Earth