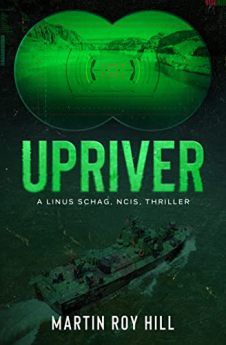 NCIS Special Agent Linus Schag is no stranger to violence and bloodshed, but when he’s sent to Iraq to take custody of two Navy SEALs suspected of murder, he finds himself thrust into a manmade inferno as coalition of forces fight to free northern Iraq from the Islamic extremist group called ISIS.

The explosion of an IED allows the SEALs, suspected of killing a fellow commando, to escape and flee up the Tigris River in a stolen Navy patrol boat. Schag pursues the SEALs in another boat assisted by an Army criminal investigator, a vengeful Iraqi interpreter, and a hostile Navy boat crew. Facing danger at each bend in the river, Schag and his companions endure ambushes, firefights, and friendly fire as he tries to discover the secret that lures the SEALs straight into the dark heart of an ISIS-made hell on earth.

This is a work of fiction, but like many of my novels, its plot is rooted in real events. In 2014, after finally extricating itself from the quagmire resulting from the 2003 U.S. invasion of Iraq, American forces were again deployed to that country. This time, U.S. forces, as well as forces from several other countries, supported the new Iraqi government in its fight against ISIS, an army of militant Islamic extremists who had taken over much of northern Iraq and Syria.

Although Operation Inherent Resolve (OIR), as the deployment was called, was technically to provide only support and training to Iraqi forces, U.S. service members often found themselves under enemy fire. By 2020, twenty-one Americans had died in combat and more than two hundred wounded. Dozens more died from “non-hostile” activities. Sadly, that included twenty-seven suicides and two homicides.

As always in warfare, the fog of war also resulted in many civilian casualties. According to U.S. accounts, at least thirteen hundred civilians were inadvertently killed by OIR bombings in Iraq and Syria, though other sources put the number much higher.

But by far, the greatest number of innocent civilians killed during the conflict died at the hands of ISIS fighters who ruthlessly murdered thousands and starved even more. According to the Associated Press, the number of civilian deaths incurred in the battle to liberate Mosul from ISIS is estimated to be as high as eleven thousand.
These are the events that inspired the plot and set the stage for Special Agent Linus Schag’s river trek into the “heart of darkness.”

United States
Martin Roy Hill is the author of the Linus Schag, NCIS, thrillers, the Peter Brandt thrillers, DUTY: Suspense and Mystery Stories from the Cold War and Beyond, Polar Melt: A Novel, and EDEN: A Sci-Fi Novella. His latest Linus Schag thriller, The Butcher's Bill, received the Best Mystery/Suspense Novel of 2017 from the Best Independent Book Awards, the Clue Award for Best Suspense Thriller,...
Learn more about Martin Roy Hill