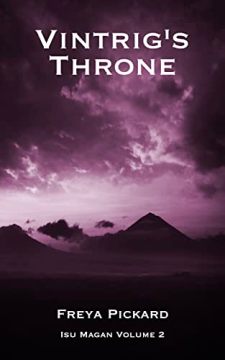 Isu Magan, heir to Vintrig's Throne, has fallen in love with Sama Conn, a travelling musician. Fearing to lose her promised inheritance, Isu is unwilling to show her true feelings for the man she loves. Terrified of her Counsellor Jya, Isu is forced to meet with Sama in secret.

Minah, Isu's servant, is happy to aid the princess in her secret dancing lessons with Sama, for Minah is in love with Trom, the drummer. For the first time in her life, Minah tells someone what really happened the night her father died.

Helmgar, Isu's steward, nurses a secret joy in his heart; he believes that Sama is the promised Summer King who will end Jya's seemingly eternal winter rule.

Sprakleas, meanwhile, continues to work for Sama whilst in disguise as a kitchen hand.

When Isu takes the crown that is hers by right, it seems that everything will change for the better.

But Jya, always working in the shadows, has many plans and as the net draws around Isu and Sama, a violent blizzard once again holds Vintrig's Kingdom its cruel grip. Isu finds herself on trial for her life and only one thing can rescue her; the Law of Substitution.

Will true love triumph over hatred and fear? Will the reign of winter end? Or will darkness spread its victorious wings over Vintrig's Castle?

Vintrig's Throne concludes the story that began in Vintrig's Kingdom.

Vintrig's Throne is the sequel to Vintrig's Kingdom and brings to a conclusion the power struggles and forbidden love created in the first book.

Inspired by a dance show in the 1990s, this tale erupted from a war of colours between white, black and red. First and fore-mostly Fantasy, this novel is about love and death, restoration and destruction. Written over a number of years as I matured as a person, this story is me.