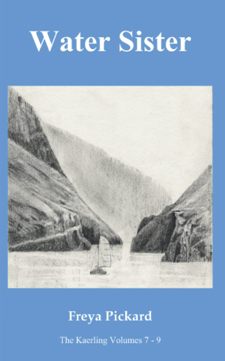 Four companions drawn together on a quest not of their making.

“I thoroughly enjoyed reading this book. It’s a beautifully written story and I find all of the characters interesting. The descriptions, particularly of the sea voyage, were fabulous. I can feel myself being present in the places described. There are lots of hints of problems to come and foreshadowing which all adds to a sense of mystery.” E Baxter

The twins, Otta and Erl, seek to retrieve the boy Derri from his kaerling family, whilst Tari is determined to rescue Lally who has been abducted by the kaerlings. Lored has promised the Zoratti that he will protect the sister that up until recently, he had never met.

But catching up with the kaerlings proves to be anything but simple, and the companions discover that they can't completely trust each other.

When they find themselves trapped on the Isle of Kiros, they become dependent on Lored to free the herb woman who can provide Lored and Otta with the remedy they need in order to continue the voyage north.

This is the third paperback in the epic fantasy series, The Kaerling. As the companions head north in the wake of the kaerling ship, their journey becomes darker and more difficult with each passing mile. If you’re into Game of Thrones, The Lord of the Rings, Ursula K Le Guin, Tad Williams and David Eddings, you’ll love this!

This novel contains Uneasy Allies, Fair Wind and Elkadanu, all of which can be purchased as separate e-books.

This novel was written between October 2019 and November 2020 whilst I ran a Guest House in South Devon. Both Brexit and Covid killed the hospitality trade so I had little else to do except write!