How to Beat Deadly Diseases With Laughter, Good Doctors, Love, and Guts. 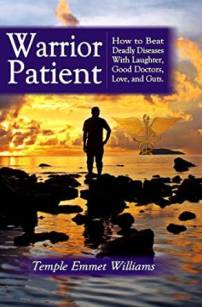 This book will forever change how you approach the miracles of modern medicine.

It is the stunning story of a person who recovers completely from a relentless series of medical problems, many of which were caused by the system designed to prevent them. They include cancer, kidney failure, dialysis, deadly infections, partial blindness, shingles, large open wounds, a hernia and a little amputation. It takes almost three years, but the patient now plays tennis seven days a week (weather permitting). He walks, bikes and works out in a gym.

Almost miraculously, he is “back to normal.” Read how he did it in this spellbinding memoir of survival.

Temple was born in Cleveland, Ohio, educated at The Hotchkiss School and Yale University. He became a journalist and was nominated twice for the Pulitzer Prize as an undercover reporter for the World Telegram & Sun in New York City. He was the Managing Editor of News/Check, an international news magazine in Africa, and then an Editor at the Reader’s Digest in the United States. He worked as a copywriter at large ad agencies like Ogilvy & Mather and Leo Burnett. He was the Creative Director of the fifth largest ad agency in Great Britain, part of the KMP Group in London, England. He... more