All Dressed In Red 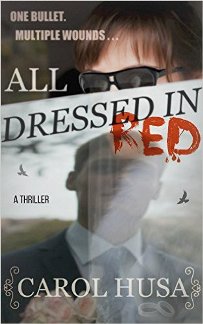 LEAVE THE PAST BEHIND.

Life to this point has been perpetually distressing for Casie Valentine. The unsolved murder of her mother and her relationship with an abusive man have left her heartbroken and discouraged.

After injuring and fleeing her lover one terrifying night, Casie believes that the future is now promising--where darkness had prevailed light will penetrate, and hopefully remain.

But upon her arrival in Sarvelle Falls, Casie learns that the friend she was going to stay with has been viciously murdered. And when a masked intruder invades the motel room Casie’s just vacated, it becomes apparent that someone wants her dead. While she tries to convince herself that her ex is responsible, circumstances are indicating something far more sinister.

Detective Rico Taylor has a reputation for solving cases. But the leads in this one are only deepening the mysteries of what secrets Casie is hiding, and of the killer's identity and his motive for wanting her gone.

Despite his frustration and contrary to his belief that the investigation is barely progressing, Rico is dangerously close to learning those answers . . . and wishing he hadn't.

All Dressed In Red: A Romantic Suspense Thriller - Book available from Amazon

Other books by Carol Husa