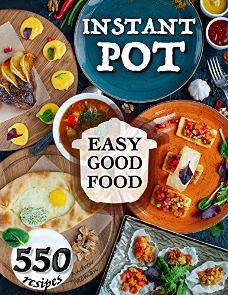 We live an active life. Often there is not enough time to take care of the most important thing - our health.

Andrew Roman (the author of this book) was faced with the problem of excess weight and began to study the body. He decided to start with his daily diet. Andrew selected recipes that everyone can quickly prepare. Now all the proven recipes are in this cookbook.

Instant pot in the kitchen makes it possible to cook delicious and simple. Andrew's children are already used to cooking according to their father's recipes and freely use this device.

550 recipes for simple, good food for the whole family. With concern for your well-being.

550 Pressure Cooker Recipes that will Help You Eat Good Food Every Day.

Andrew Roman is an author and health obsessive who was born and raised in New York City. He studied at New York University and after graduation he worked for several top companies in the city, rising quickly to senior management positions.

But his lifestyle while achieving his career goals was suffering and when he had a health scare after gaining a huge amount of weight, he knew that something had to change.

Andrew began studying nutrition and why we gain weight. Soon he had changed the way he lived and ate and with the change in his habits he shed 40 pounds. That was 10... more

Other books by Andrew Roman