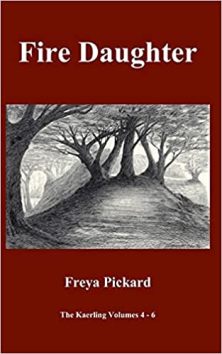 When Lored escapes from the Isle of Yrjo, he discovers his problems have only just started.

Freya’s ability to craft complex characters and create an interwoven storyline shows well in this volume! The way things play out as the story unfolds, with some mysteries answered and others yet to be revealed, makes me want to know more of this world! - Troy

On returning to his homeland, Lored is met with shocking news that turns his life upside down. His quest for the truth takes him to the hidden land of Zorat where he is given a new purpose in life; to find the sister he's never met.

As the kaerling influence spreads throughout the land of Falna, Tari, a young acolyte, feels threatened by their continued questions. When the kaerlings abduct one of Tari's friends, she and the priestess, Undine must find a way to leave the Temple.

Meanwhile, Otta and Erl seek to find the young boy Derri and rescue him from the kaerlings' clutches. But first, they must face Jas, the kaerling hellbent on murdering Otta...

From the arcane towers of Olin Heon and the heights of the Temple, to the lush southern lands of Zorat, this tale  brings together five disparate paths that finally converge in the mountain city of Aura Vere.