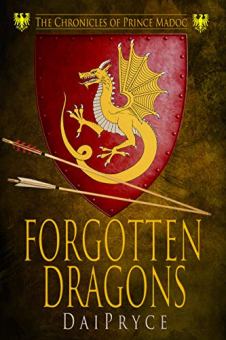 300 Years’ before Columbus . . . the little told story of a Welsh prince named Madoc

Cherokee legends tell of a brave group of moon-eyed, pale-skinned explorers who many generations ago crossed a great water to reach their lands. These people called themselves Welsh, and their story begins here . . .

The North Wales princedom of Gwynedd mourns the death of its greatest leader, Owain. Not all grieve though, his son Dafydd, positions himself for an ambitious power grab. When Owain’s bastard son, Prince Madoc unearths evidence of a murderous plot, his duplicitous half-brother Dafydd is one step ahead of him. Caught up in a sibling power struggle, the net closes on Madoc, but a chance meeting with an old friend from the Norse city of Dublin offers him an escape route, although there is a grave price to pay.

Exiled in Dublin, a plan is hatched for a triumphant return to Gwynedd, but there are bumps in the road still to negotiate. One of the agents sent back to garner support for the cause is captured, while their host’s beautiful daughter proves a fatal attraction for Madoc’s boisterous young half-brother, Cynwrig.

The story reaches its dramatic and heart wrenching climax on the ancient druidic island of Anglesey. Will Madoc succeed in restoring order and justice to his homeland, or does a wondrous new world far across the ocean beckon? United States
Born in Llanelwy, North Wales. The author grew up in the small coastal town of Flint, famous for its thirteenth century castle. After graduating from Leeds University with a Mining Engineering degree, he spent the next seven years living and working in Southern Africa. He now resides in the beautiful state of Colorado but returns to Wales as often as possible to visit family and soak up...
Learn more about Dai Pryce