A Girl Lost in Time 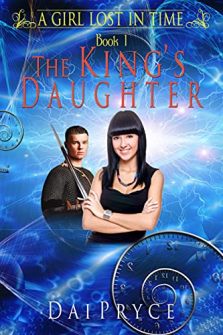 Wales 1294...A hated English king, a country rising in violent rebellion against him, and Megan Lynch, a sixteen-year-old from Virginia Beach who is a ‘Girl Lost in Time’

Following the death of her Navy SEAL father in Afghanistan, Megan Lynch is packed off to a new school in a new country.
“Go stay with your grandmother in Wales, it’ll keep you out of trouble,” her mother had declared. In her mom’s defense, she could never have predicted the remarkable events that unfolded in the ruins of Flint Castle that afternoon. She certainly wouldn’t have known about the strange Welshman or the pendant he gave Megan. Even then, if it hadn’t been for the encounter with a local bully, Megan might still be wandering around the ruins of a thirteenth century castle, instead of a fully functioning medieval one . . .

The ‘King's Daughter’ is a medieval time-travel adventure. It is Book 1 of the four book 'A Girl Lost in Time' series.

It tells the story of a twenty-first century girl and a thirteenth century boy against the backdrop of the Second Welsh Rebellion against King Edward I, in 1294

The lead character is a teenage Welsh history buff named Megan. She is American, but her mom is Welsh, and she sends Megan to live with her grandmother in Flint, North Wales after the death of Megan's father.

Flint (the town where the author grew up) has a ruined 13th century castle that Megan finds fascinating. After falling from the ruined battlements, she wakes up in the castle during its heyday.

Her striking similarity to the king's daughter is initially her saving grace, but she knows her luck cannot last forever. Thankfully, help is at hand in the shape of a handsome young knight's squire named Hugh.

Megan is a strong, independent character whose favorite band is the Dollyrots. Her romantic encounters to date have been limited, and her first meeting with Hugh goes about as well as usual where cute boys are concerned. Despite several 'lost in translation' moments, their friendship grows deeper as they attempt to survive the trials and tribulations of oppressed medieval Wales.

Other books by Dai Pryce