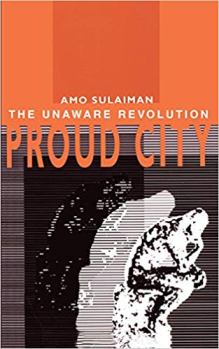 The book deals with human relationships.
A police officer, Charles, is shot by accident in a robbery by a youth, becoming sterile as a result. Since he cannot have children, he leaves the police force to open a pizzeria, a place for young people to meet and discuss outside their parents’ rigid range of control. One of these young people, Chuck, is suffering from the breakup of his parents’ marriage. He suspects his mother of having an affair because she says she has to work every night as a nurse at the hospital, but he’s unable to detect clear evidence of his suspicion. Another of the young people at the pizzeria, Virus, is a whiz at the computer and discovers the truth for Chuck: a network of adultery involving his parents. The young debate at great length at the pizzeria, wishing to change the way of life in Proud City.

I wrote this book because the young have a saying in this world, not only the old.

Born in Guyana and continuing his education in Canada, AmoSulaiman received a B.A. degree in philosophy and psychology at the University of Guelph in Ontario. He then completed his Master s degree in philosophy in Montreal. Shortly after this, he went to Switzerland where he did his Doctorate in Philosophy at the University of Bern and a BA in English and American Literature. He has been living in Switzerland ever since.
He is the author of two books on philosophy, one on English literature, and several other novels, including Proud City.

Other books by Amo Sulaiman