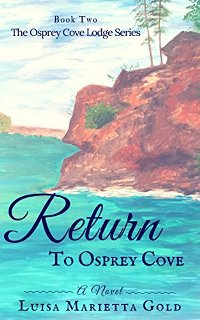 As Catherine watches the empty coffin of her husband being lowered into the ground, she’s convinced that the mysterious circumstances surrounding his death are being buried with him. But are they?  Will her return to The Osprey Cove Lodge and a chance encounter with Alex Droxell hold out hope of new beginnings?  There are secrets yet to be discovered. Book 2 of The Osprey Cove Lodge series is full of suspense, mystery, romance, and intrigue.

As an author, I enjoy good character development. Many of my readers have told me that they feel like the characters seem like old friends. They can't wait to find out what happens next in their lives. The series is written in a unique manner with a number of min-plots going on in various geographic locations at the same time. It is a delightful blend of romance and intriguing mysteries that keep you turning the page. You will be transported to another time and place that you won't want to leave anytime soon. One reader commented that she wished The Osprey Cove Lodge was a real place so that she could visit there. Well, she may not be able to visit in person, but she can go back to the lodge each time she opens one of the books in the ongoing series. It's easy to get hooked on the books in The Osprey Cove Lodge Series.

Luisa Marietta Gold was born in Pennsylvania where she spent a large part of her adult life. She moved to North Carolina after the birth of her only daughter. She published her debut novel, Escape to Osprey Cove, which is Book 1 of The Osprey Cove Lodge series in September 2016. The Osprey Cove Series was born from Luisa's love of the Rideau Lake region of Canada, the outdoors, and lake life. She spent many years enjoying the Rideau region while staying in lodges reminiscent of the lodge in her first novel. She currently resides on eleven acres in her North Carolina home near an... more

Other books by Luisa Marietta Gold

when is book 11 coming out

when is book 11 coming out Osprey Cove series I read all 10 now you left me hanging, I want to continue thank you