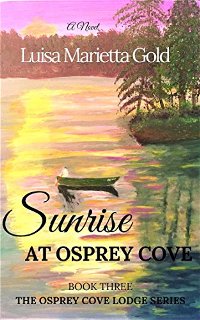 You can run, but you can’t hide.  As Doug starts his new life in Aruba, he will quickly learn how true that statement is.  Meanwhile, wintertime has descended on Osprey Cove, but there’s warmth inside the lodge as Catherine and Alex embrace new beginnings and face life-changing decisions. Back in Chicago, romance has entered Michael’s life while he helps his sister Margaret divert a crisis in Rio.

A new mystery confronts Max and Eva in Puerto Vallarta as they continue to try to solve the case of the missing diamonds.  They are out there somewhere; diamonds are forever, after all.  But where?  Share the mystery, intrigue, and romance in the lives of the Osprey Cove characters you’ve come to know and love, and meet new ones in Book 3 of The Osprey Cove Lodge Series.

Excerpt:
“I’m not sure you are aware that the villa you bought has quite a history.  Has anyone shared it with you?”
Max and Eva looked at each other, as Max answered, “I don’t think so.”
“Well,” he continued,” this villa was not always as you see it now.  It has been added onto many times over the years.  Just before the previous owner bought it, the villa underwent a major renovation.  Actually, there is a section of this villa that dates back to the late nineteenth century.  Legend has it that the original structure was owned by a notorious ship captain, Edgar Byrde, who used it as his home base.  A story has been passed down over the decades that he buried treasure somewhere on the property. The property stayed in the ship captain’s family until the mid-twentieth century. The last ancestor, Jackson Byrde, was said to have lived an extravagant lifestyle, jet-setting around the world on his private plane.  When his plane crashed in the 1950s, and he was killed leaving no heirs, the property was auctioned off and bought by a man named Baker.

The mysteries and romances continue. A new life is on the horizon for some of the beloved characters in this addicting series. Enjoy the unique writing style of following several mini-plots at the same time. Each book in the series will draw you in so that you won't want to leave the lives of the characters you have grown to love. You won't have to. Their lives continue on in the next book of the series.

United States
Luisa Marietta Gold was born in Pennsylvania where she spent a large part of her adult life. She moved to North Carolina after the birth of her only daughter. She published her debut novel, Escape to Osprey Cove, which is Book 1 of The Osprey Cove Lodge series in September 2016. The Osprey Cove Series was born from Luisa's love of the Rideau Lake region of Canada, the outdoors, and lake life...
Learn more about Luisa Marietta Gold