THE HEART OF GOLD 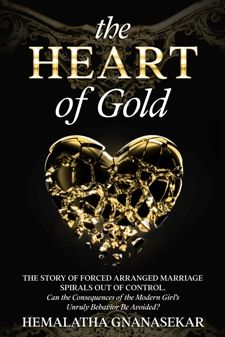 The Heart of Gold is a gripping romance thriller that explores not only the dangerous territory of love and marriage, but also the changing culture of modern Indian city life.  Mukesh and Nithya are caught between time-honored traditions and the new, fast paced global lifestyle.

Mukesh, a successful business man on a steady rise in the corporate world, is hesitant when his mother urges him to find a wife. But when she introduces him to the bride she’s chosen for him, Mukesh is surprised by his luck: Nithya is beautiful, smart, cultured, and from a good family. It seems like a perfect match, and he finds himself falling in love.

But before he can settle into his new married life, Nithya tells him the horrible truth: her parents blackmailed her into the marriage. Instead of love and companionship, it’s longing and agony for Mukesh while Nithya feels only anger and resentment towards him and her parents.

To make matters worse, Giridhar, a flame from Nithya’s past, unexpectedly makes his way back into her life. At first, Nithya is wary of her ex, but as she grows more and more distant from her husband and her parents, she finds herself letting him in. Giridhar convinces her to go away with him on vacation, where events take a dangerous turn. When she awakens, locked inside a lodge alone in the dead of night, to a strange noise at the door, she realizes that perhaps she shouldn’t have trusted him so blindly.

Meanwhile, Mukesh struggles to come to terms with his failed marriage and his wife’s abandonment. With no one else to turn to, Nithya calls him in her desperation, but will he be willing to help her despite his anger and wounded pride? Can they put the past behind them to disentangle her from the peril she put herself in?

The fact that the teenage girls are very unruly and do not care to listen to good advice from their parents is the theme of the book.

Other books by Hemalatha Gnanasekar