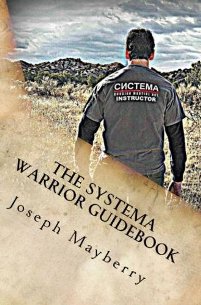 One of the most complex yet simple, challenging and rewarding paths in the vast universe of martial arts is Systema, the Russian Martial Art. Systema is more than just a martial art. It is a complete and ever evolving process of mental preparation, martial training and health and longevity maintenance. Systema conforms to the individual, rather than asking the individual to conform to it. This allows people with differing abilities, and what some would call disabilities, to excel. The individual develops movement and applications of its principles which are not only suited to their apparent deficiencies, but are simultaneously more efficient, applicable, and effective for that individual.

It is a way. It is a path. A path that potentially can change not only the way one fights, trains, walks, and breathes, but can also change how one conducts himself in all aspects of his life. This is your guide.

The Systema Warrior Guidebook: A Systema Guide to Life - Available from Amazon

Joe Mayberry is a Systema Instructor certified by Vladimir Vasiliev, police detective, former United States Marine, bouncer, bodyguard, and a highly sought after self defense speaker and instructor. Trained in Martial arts since 1974, Joe brings a no-nonsense approach to his teaching and a street smart attitude to his approach to the martial arts. In 2010, Joe opened Systema St. Louis, the only school of Russian Martial Art in the St. Louis Metropolitan area. Joe and the school have been featured on every major news outlet in St. Louis.