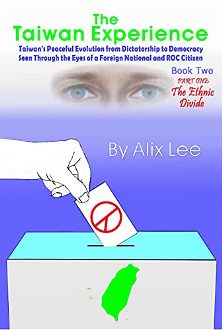 This book, Democracy Takes Root follows on from the first in The Taiwan Experience trilogy, The Seeds of Democracy.

The e-book version of Book Two: Democracy Takes Root, like Book One, is divided into three parts. Book Two is being published in three separate parts for reasons explained in the book's description on Amazon. This is the first part of Book Two.

Book One covered first the history of Taiwan, and then the history of the growing political liberalisation that was taking place in the 1980s, as seen from the perspective of a foreign national (myself) who came to the island in the mid-1980s knowing next to nothing about the place, and eventually took up full citizenship.

Book Two: Democracy Takes Root focuses primarily on the 1990s and the first years of the new millennium, although references are made to events both before and after this time period when necessary to provide more context.

Although the books that constitute this trilogy can be read separately, especially if the reader already has some degree of familiarity with the subject, to get the full picture of the entire process of the political and social change that has taken place in Taiwan over a period of several decades, I would still recommend reading the trilogy from the beginning.

The trilogy may be disturbing reading for some people. If what the reader is looking for is just a glowing account of the happy process of democratisation in Taiwan, this isn't it.

Although the trilogy does look upon that process of democratisation as a very positive thing, it has to be admitted that the road to democracy in Taiwan, even though it was a largely peaceful one, was not an easy one. Apart from that, even though the process of democratisation can be considered complete at the time of writing in 2021, there are many sensitive issues related to the politic and social changes that have taken place in Taiwan over the past several decades which have still not been dealt with fully and fairly even today. This book is a no-holds barred, no punches pulled account of Taiwan's democratisation, which does not shy away from dealing with any of these issues head-on.

Part One of Book Two of the trilogy focuses on one of them. The name of Part One is The Ethnic Divide.