True Tales of a Traveller Volume One 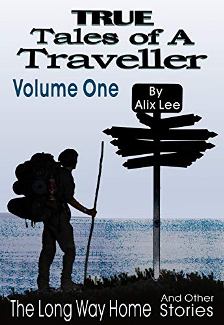 The True Tales of a Traveller series of short stories and novellas consists of several dozen real-life travellers' tales covering three and a half decades. Although presented in a short story format for reading convenience, these stories are not fiction. Apart from some of the characters’ names, which have been changed to protect their identities, everything in these stories is true.

These stories do not all fit neatly into the ‘travel story’ genre, although some will indeed meet most readers’ expectations in this regard. Others are simply adventures - or misadventures - that happen to have taken place in various different countries. There are three short stories and two novellas included in this book.

The first of this series of stories, Goodbye Sinai, is set in 1982, at the time of Israel’s return of the Sinai peninsula to Egypt, during my time working as a volunteer on a kibbutz in the Negev desert.

The second of this series of stories, Working Holiday, is set in a hotel just outside Athens, Greece, in 1982, where I worked with two friends from the Israeli kibbutz. The hotel is still in operation at the time of this book's publication.

The third of this series of stories, The Long Way Home, is set in not one but half-a-dozen European countries, in 1982 and 1983.  At over 17,000 words, this story is a short novella. In addition to being a travel story, The Long Way Home is also a love story, and a story about the unexpected twists and turns that can occur in personal relationships.

The fourth story in the series, Alternative Medicine, is set mostly in Greece and Egypt in 1983.  At around 13,000 words, this is a lengthy short story which may need more than one sitting. As well as being a travel story, Alternative Medicine is also a story about career hopes, delusions, expectations, and opportunities.

The fifth story, A Career in Travel, is at nearly 40,000 words a substantial novella-length account set mostly in Britain in 1984. The story is about a young traveller’s attempt to integrate his love for travel into a regular, settled lifestyle in London. Although humorous in places, this is also a thought-provoking story that goes to the heart of what it means to be a traveller, the differences and similaities between a traveller and a tourist, the differences and similarities between a traveller and an immigrant, and a traveller's place in society. Travel in the British Isles and a number of nearby countries is related as the traveller tries hard to come to terms with self-imposed travel limitations and the challenges of settling down into a more sedentary, and hopefully matrimonial life. Like the other stories in the series, it provides not only an entertaining read, but also information on all the places visited, some relevant only to the era in which the story is set, but most still relevant at the time of this book's publication.

All these stories can read separately, but the best way to read them is to start with the first.

These stories, and those included in the second volume go back in time a very long way. Some have suggested that I only tell the recent tales and skip the early ones. I disagree strongly with this. The 1980s was an era of adventure for me and some of those adventures that I was in could only have happened to a young man, and could only have happened in that era. These are still tales that need to be told. Apart from that, the messages of these stories remain as valid today as ever. Additionally, I don't want to incriminate people who never caused me any harm, even though some of their actions may have violated local laws at the time. Having more than three decades between the stories and their telling is the best way of ensuring that I don't.

These stories relate how I began travelling, and take the reader to the point at which it was no longer possible for me to return to the settled life I had once led. As such, apart from being entertaining stories, they can also be taken as advice, as an encouragement, or even as a warning...