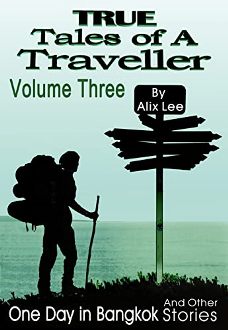 The True Tales of a Traveller series of short stories and novellas consists of several dozen real-life travellers' tales covering three and a half decades. This is Volume Three of the series, and it includes three stories, Overlanding (Part Two), One Day in Bangkok, and Solid Gold, Easy Action.

Of all my travels in the 1980s, in terms of time spent, undoubtedly no journey made such a deep and lasting impression on me as this overland trip from Karachi to Rotterdam, which in total took just a little over three weeks. The journey turned out to be something I originally had never suspected for a moment it would be: an intensive course in the follies of racial prejudice and ethnic chauvinism. The full story (Parts One and Two) includes examples of racial and ethnic prejudice and discrimination involving, one way or another, Japanese, Pakistanis, Iranians, Arabs, Turks, Greeks, Germans, Dutch, British, and Irish, whites, blacks, Jews, Muslims, and non-Muslims! Although this turned out to be the overriding 'theme' of the journey, needless to say, when I embarked on it, such a possibility was far from my mind.

The tenth story in the True Tales of a Traveller series, One Day in Bangkok is set in Thailand and the Netherlands. It's a story of an ambitious travel plan thwarted by the kind of seasoned tricksters who prey on tourists anywhere in the world where the volume of foreign visitors make it worthwhile to devise schemes to relieve them of their finances. At least one of the schemes detailed in the story is still in use today, though perhaps in a slightly different form, and it even has its own Wikipedia page. This true account serves a reference and a warning, just as valid for travellers who have been on the road for years as it is for those setting off overseas for the first time.

The eleventh story in the series overall and the last story in this book, Solid God, Easy Action, is probably the most unique story of the whole series, for it involves a very unusual kind of work I was engaged in for several months in east Asia, and this kind of work seems to have long since disappeared, almost without a trace.

Like all my books and stories, this one will be available free on Amazon from time to time.