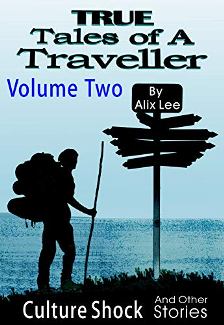 In the late 1980s and in the 1990s, I very much regretted not being able to tell these particular travel stories to a wider circle of people than just family, friends, and fellow travellers. At that time, with no background in writing, and without connections within the book publishing industry, I knew the chances of my travel stories being published were very remote. Self-publishing was prohibitively expensive, and from what I had heard almost always a complete waste of time, money, and effort.

In 2018, having long given up any hope of ever seeing these stories published, I discovered that it was possible to publish e-books, and even printed books, on Amazon without any initial expenditure. I immediately set to work on recounting the adventures and misadventures that constitute the True Tales of a Traveller series!

This book, Volume Two of the series, consists of only three travel stories; two substantial novella-length stories separated by a story of short story length. There was no other reasonable way to present these stories. On the one hand, not including the third story of this volume, which comes in two parts, would have made the volume too short. But on the other, including the second part of that story would have made the volume way too long.

These stories can read separately, but the best way to read them is to start with the first. That principle applies to the whole series, and also to this volume. It isn't necessary, however, to read all the stories of Volume One to enjoy those related in Volume Two.

The book begins in late 1984 with the sixth tale in the series overall, Culture Shock. This story finds the young traveller (myself) taken from the relative orderliness of a life in London where he had been attempting, with mixed results, to pursue a career in travel (related in the fifth story of the series, A Career in Travel), and throws him into the furious assault on the senses that constituted life in the Indian capital, Delhi, at that time.

His attempt to integrate his love for travel into a regular, settled lifestyle in London had already begun to unravel even before he left the UK. After only a couple of weeks in India, his career as a travel industry employee has slipped into the past, replaced by an even more vivid and overpowering version of his pre-existing career as a full-time traveller.

The second story of this volume, Just A Businessman is set in India-administered Kashmir. At nearly 17,000 words, this account constitutes a lengthy short story which may need more than one sitting to read. In addition to being a travel story, Just A Businessman is also a story about religious and ethnic conflict and political upheavals, and the extents to which these can affect the life of a traveller, or an outsider.

At first, I was reluctant to include this story in the series, for fear of possibly incriminating people who may have violated local laws of the time, but have since learnt that such consequences are no longer possible, and the story can now be told without fear of consequences.

Overlanding (Part One) is the third story in this volume, and at over 46,000 words the longest story of the series so far, for one of the shortest periods of actual travel.

Of all my travels in the 1980s, in terms of time spent, undoubtably no journey made such a deep and lasting impression on me as this overland trip from Karachi to Rotterdam. Not only did it unceremoniously blow away many of my own preconceived notions of life in Pakistan and Iran, it was also a harsh lesson for me as a traveller in the virtues of being prepared for any journey into terra incognita. Additionally, the first part of the journey, from Karachi to the Turkish border with Iran, was relatively dangerous, not due to involving difficult terrain, but rather to man-made hazards. But overall, the journey turned out to be something I originally had never suspected for a moment it would be: an intensive course in the follies of racial prejudice and ethnic chauvinism.

I believe that racial prejudice and ethnic chauvinism are weaknesses inherent in human nature. We all suffer from them to some extent at some time or another, usually both as perpetrators and as victims, however much we may like to think otherwise. All we can really do is try to recognise these tendencies for what they are and keep them in check. I was both a victim and a perpetrator of racial prejudice and ethnic chauvinism on this trip.

Despite being set in the mid-1980s, this story has an unexpected relevance in 2020, as it also deals with a topic which has attracted considerable public scrutiny at the time of publication: institutionalised racism and police brutality, in this case, within the British police forces.

Like all the other stories in the series, these three stories provide not only entertaining reads, but also information on all the places visited, some relevant only to the era in which the story is set, but most still relevant at the time of this book's publication.

Paperback versions of each volume in the series are also available.