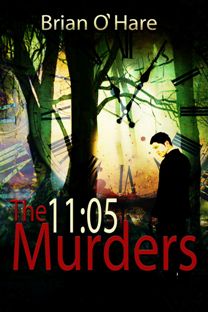 The 11.05 Murders is the second in the Inspector Series. Three people are murdered on separate Tuesday evenings at precisely 11.05. Random clues point to random suspects, but too many questions remain unanswered. Why 11.05pm for each killing? Is there any connection between these deaths and a rape that occurred at Queen’s university twelve years before? What is the connection between the killings and Sergeant Stewart’s mystery informant? Who is the violent stalker who twice nearly kills Detective Allen? What is his connection, if any, to the murders? When one of his team is kidnapped, Inspector Sheehan has literally only minutes to make sense of these questions if he is to save his colleague’s life.

The first thing I thought after reading this book is: why isn't Brian O'Hare better known in the crime writing world? This man is extremely talented, and his book a wonderful ‘whodunnit’ that left me guessing until the end. [Joseph Sousa, Crime-writer]

Brian O’Hare is an intelligent and compassionate storyteller who takes his chosen genre a decent literary distance beyond your average ‘whodunnit’. [Robin Chambers, author]

An explosive mystery that keeps you guessing until the very end, riddled with unseen surprises and breathless suspense! [Wesley Thomas, writer and blogger]