The House on Cooper Lane

Based on a True Story 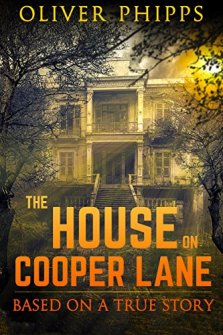 It’s 1984 and all Bud Fisher wants to do is find a place to live in Madison Louisiana. With his dog Badger, they come across a beautiful old mansion that was converted into apartments.

Something should have felt odd when he found out nobody lived in any of the apartments. To make matters worse, the owner is reluctant to let him rent one. Eventually he negotiates an apartment in the historic old house, but soon finds out that he’s not quite as alone as he thought. What ghostly secret has the owner failed to share?

It’s up to Bud to unravel the mysteries of the upstairs apartments, but is he really ready to find out the truth?

The incidents relayed in this book are all based on actual events in my life. Names have been changed, and the timing of the occurrences has been adjusted into a more suitable framework for the story. The events themselves happened and I endeavored, only to make changes necessary for keeping congruency.

Thank you, and I hope you enjoy The House on Cooper Lane.

After playing for thousands through the fall and winter of 1996 Oliver's band abruptly disbanded. In early spring of 1997 Oliver, along with a guitarist friend, got together with the intention to form a new group... more

Other books by Oliver Phipps