What She Ran From 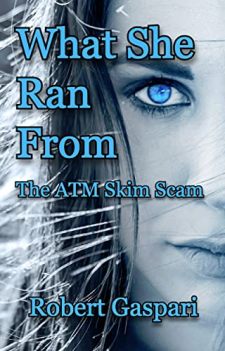 What she ran from was brutality and certain death. Not from the hands of an abusive lover, but from her equally sadistic employers. Tara Lipton discovered a secret hidden in the ATM software code of the units produced by the company she worked for. This US subsidiary of an eastern European company skimmed tiny amounts of cash from customer accounts at random so it would remain undetectable. These insignificant quantities, multiplied by millions of monthly transactions, added up to windfall profits. She tested her suspicions, and that’s when it all came crashing down around her.

Corporate goons from overseas brutalized her coworkers to find out who stole cash from their skim scam. After Tara pointed to a hack attack on the company servers, she decided it was time to run. Her employers torched the internet cafes her engineered hack pointed to, and they planted the body of a dead hooker in her former condo. They wanted the police to find the runaway for them, and then they would snatch her up and make her talk.

Bert Barton, an old school private investigator and bounty hunter, saves the runaway woman from a different fate with even more horrible consequences. He intervenes on a train platform as a street hustler or pimp uses force to coerce the at-risk woman to go with him against her will. And so begins the strange partnership between a man who only wanted to help a damsel in distress and a woman with more than one dark secret.

Bert helps Tara, on the run as Lara Tipton, and gets an old FBI friend to help investigate her former employers. As the investigation continues, so does this enigmatic woman’s infatuation with the PI who rescued her. Everything comes to an explosive conclusion as Tara Lipton’s darkest secret comes to light, while Bart Barton, FBI Agent Jack Riley, and others try to sort out the truth about their mysterious runaway.

This was something different for me - I hope you like reading it as much as I enjoyed writing the story.

United States
I always had books in my head, just never the time to get them out and available to others. As I approached retirement age, I thought it was the perfect opportunity to write. The ease of self-publishing makes writing a breeze now. My humor and interests are off beat, so that is reflected in my stories and I gravitate towards science fiction/fantasy with romantic entanglements in the plot...
Learn more about Robert Gaspari